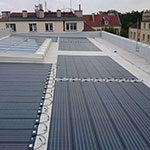 The latest investment in the National Maritime Museum is to build a “Ship Wreckage Conservation Centre with the Studio Magazine in Tczew”. Implementation began in the summer of 2014 and the project is scheduled for completion at the end of April 2016.

Wreckage Tczewskie Conservation Center is an innovative and rare in Europe investment. Its total cost is 22 million and is funded by the Norwegian Financial Mechanism and the Ministry of Culture and National Heritage. Tczewska branch of the National Maritime Museum is the second, after the Maritime Cultural Centre, an investment of this type of co-financing funds. The project is implemented in partnership Polish – Norwegian with the National Maritime Museum in Oslo and the Museum of Cultural History in Oslo.

Building Conservation Center Ship Wreckage was designed Tczewa center, in the zone of the Southern fringes of the Old Town. The property was given to the Museum in the late 70s and 80s – the twentieth century by the Municipality of Tczew. Previously housed in buildings Meters Factory (former team Factories Metal Products).