On Wednesday June 21st, one of the largest rooftop solar projects of the Netherlands was officially connected to the grid. Plantion’s solar plant has an installed capacity of 2.3MWp and consists of 18.500 Solibro thin film solar modules supplied by Hanergy Europe. The system produces approximately 2.000 MWh of renewable solar energy per year, a CO2 reduction of 1.300 tonnes per year, the equivalent of energy consumption of 650 households. 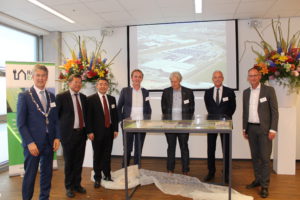 The grand opening ceremony was attended by Vice-mayor Mr. Leon Meijers of the municipality of Ede and Mr. Guosheng Zhang, commercial counsellor of the Chinese embassy together with a large delegation of Chinese and other foreign guests.

For Plantion this was the finalisation of an ambitious renewable energy project and a large step in making its immense office and trading building sustainable. Plantion’s rooftop solar installation is currently the largest project with thin film modules in The Netherlands. Plantion’s solar plant has been developed by Rooftop Energy who also operates and maintains the installation. The project also receives SDE+, the national renewable energy subsidy from the Dutch government.

Plantion’s CEO, Peter Bakker is very pleased with the result: “In our carbon neutral ambition this solar plant means a big step forward in making our company’s footprint more sustainable, since it provides for about one third of our total energy consumption’. Leendert Florusse, CEO of Rooftop Energy: “We are proud to have realised this large and challenging project for Plantion together with our project partners Hanergy and Sunprojects.”

Mr. Guosheng Zhang, Commercial Counsellor from the Chinese Embassy: “We are confident that China can achieve its ambitions in green growth, not the least because we have extremely strong and innovative companies, represented by Hanergy. As a global leader in thin-film solar power technology, Hanergy has been constantly exploring new ways to make use of energy from the sun anywhere and anytime. They have helped to build solar power stations on rooftops and greenhouses, on grassland and at sea. They have developed mobile charging points on tents and backpacks, on campervans and river ferries. Now Hanergy is also working together with the Dutch government to build a solar power bicycle path. This is a really exciting project that might change the very definition of “road” in the future. With companies like Hanergy to provide high-tech solutions in sustainable energy, and with companies like Rooftop Energy and Plantion to explore and invest in such solutions, we are optimistic that the world will be able to achieve green growth, and we have no doubt that China and the Netherlands shall enjoy closer cooperation that could benefit both of our peoples for generations to come.”

Hanergy, the largest Chinese private renewable energy company and manufacturer of thin film solar modules, supplied the solar modules from its German subsidiary Solibro. Sunprojects, one of largest EPC companies of the Benelux, has arranged the installation of the project.

BNG Bank, the Dutch municipality bank and PPM Oost provided a loan from the Innovation and Energy Fund of the Province of Gelderland.

Plantion in Ede is a large modern and inspiring market place for horticultural and flower growers and commerce. Revenue in 2016 was almost €100 mln. http://www.plantion.nl/

Rooftop Energy designs, finances, develops and maintains solar stations in The Netherlands. It has a portfolio of 120 large solar projects. http://www.rooftopenergy.nl/

Hanergy is the largest private renewable energy company of China with a total installed capacity of over 10 GW in water, wind and solar. In Europe, Hanergy develops large solar projects next to the sales of thin film module sales of its German and US subsidiaries Solibro, MiaSole and Global Solar. www.hanergy.eu

Sunprojects Sunprojects is one of the largest installers of solar roof and field projects in the Netherlands and Belgium, with a total installed capacity over a 100MWp. www.sun-projects.nl