13 March 2019 –  Groningen, The Netherlands –  Mr. Philip Broeksma, Alderman of renewable energy at Groningen municipality, has officially opened solar park Roodehaan located in the city of Groningen, the Netherlands. he opening event took place in the presence of government officials of the Chinese Embassy and the senior management of Hanergy Thin Film Power Europe, subsidiary of Hanergy Thin Film Power Group, and Solibro. 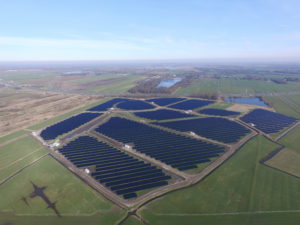 Next to co-developer of the project, Hanergy Europe is also the exclusive supplier of the 81,000 thin film modules that have been manufactured by Solibro (Germany). Hanergy Europe has been active in the Dutch solar market since 2011 and this project has been its largest development in the Netherlands so far.

For Groningen municipality, this is the largest solar park within its municipality. ‘This solar park is a major milestone in realising our municipality’s ambition to become energy neutral by the year 2035’, according to Mr. Broeksma.

Mr. Ming Li, CEO of Hanergy Thin Film Power Europe commented that the Roodehaan solar park is a landmark project that resembles the success of Hanergy’s solar development strategy in the Netherlands. ‘Hanergy takes great pride in having co-developed and supplied its Solibro modules to this project in close cooperation with its Dutch project partners’.

According to Mr. Guosheng Zhang, Economic and Trade Councillor of the Chinese Embassy this solar project illustrates the key role that China and Chinese companies play in the renewable energy transition in the Netherlands and the rest of Europe’.

Solibro GmbH is one of the world‘s leading manufacturers of CIGS thin-film modules, with a production capacity of 145 MW. Solibro has headquarters in Thalheim, Germany and a research site in Uppsala, Sweden. For further information, see website: www.solibro-solar.com